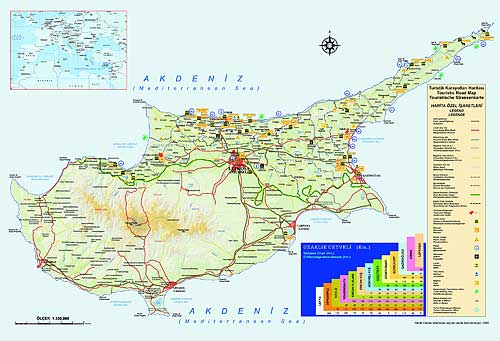 Looking at a road map of North Cyprus, you soon see that all roads eventually lead of Nicosia. This city is capital to both North and southern Cyprus, divided down the middle by the border. The old city is a fascinating maze of streets that criss-cross between the old city walls, still remarkably intact.

Most visitors to North Cyprus head for the north coast and the pretty coastal town of Kyrenia. It's beautiful Venetian harbour is lined with cafés and restaurants, and it's an ideal place for an romantic dinner under the stars.

East and West of Kyrenia

From Kyrenia, a new road runs due east towards the rugged Karpas Peninsula, with its wild donkeys and deserted beaches. Head west from Kyrenia, and you'll pass some of the best beaches in North Cyprus, with the dramatic backdrop of the Kyrenia Mountains behind.

The atmospheric walled city of Famagusta still dominates the east coast of North Cyprus, with its vast stone walls topped by Othello's Tower. It's just a short drive in your North Cyrus hire car from Famagusta to the impressive ruins of the ancient city of Salamis - and its lovely beach!

Wherever you go in your North Cyprus rental car, you'll be driving through both beauty and history. Enjoy!

ONLINE BOOKING
Have you tried our new online booking system?
It's easy, faster and secure!

Looking for cars for sale?
We sell our used rental cars at cheap prices.
Read details