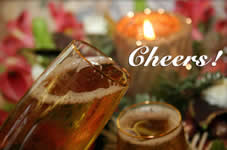 Many of North Cyprus’s public holidays are imported from Turkey and are a mixture of official patriotic commemorations and religious festival holidays.

In North Cyprus New Years Eve night is filled with parties with lots of heavy drinking, and singing just like the rest of the world and spectacular fireworks welcoming in the New Year. The holiday may be labelled as a secular holiday by some families but you will still find in some houses and schools there are Christmas trees, and presents being exchanged.

April 23rd is celebrated all over Turkey and Turkish Republic of Northern Cyprus, there are performances and vast ceremonies it is in accordance with the founder of the Republic of Turkey, Mustafa Kemal Ataturk, its dedication to the children of the country emphasizes the fact that they are the future of the nation. The Grand National Assembly was established on April 23rd 1920 in Ankara during the War of Independence, and so from the ashes of the Ottoman Empire the foundations for a new independent, secular and modern republic were laid.

In most countries in Europe Labour Day is celebrated, although it can commonly be known as May Day. It was the Labour Union Movement who turned it into a holiday to reward the workers for their economic and social achievements. Although in North Cyprus it is a movable public holiday and on this day government officials only are closed. 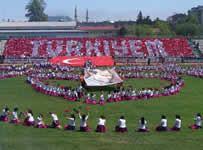 On May 19th 1919; Mustafa Kemal Ataturk landed on the black sea coast at Samsun the best landing point on that coast the day is celebrated to memorialize the beginning of Turkish War of Independence, Anatolia and Istanbul were occupied by navel forces of foreign countries and this day commemorates their liberation. May 19th was proclaimed Youth and Srorts Day by Ataturk himself and this serves to honour the founder of the country, a ceremony is held at Anitkabir, Ataturks mausoleum in Ankara which is attended by top civilian and military officials, ceremonies are held all over Turkey and North Cyprus during this holiday.

July 20th 1974, recalls an important day in the history of Cyprus. The division of the island stems from its violent struggle between Turkish and Greek invaders which can still be perceived to this present day. The Greek armed forces organized a coup d etat on 15th july, 1974 against Makarios who was the Archbishop at the time along with his government, this was done in the hope of uniting the island with Greece. The Greek Cypriots slaughtered all inhabitants of many Turkish Cypriot villages and razed them to the ground during the days of the overthrow.Turkey responded to the massacre 5 days later on July 20th, 1974. The Turkish military intervention also called the Turkish Peace Operation was launched. To prvide safty Turkish Cypriots and to stop bloodshed the Turkish troops invaded the north of the island. Since the terrible events of 1974 Cyprus has been divided, with one third of the north being occupied by Turkish Cypriots and the Greek Cypriots having control of two thirds of the southern part of the island. Peace and Freedom Day is celebrated as the anniversary of the occupation the northern part of the island by the Turkish troops in 1974 in Northern Cyprus. There are also ceremonies and military flight parades with waving of Turkish and Northern Cyprus flags.

After 1956 political situations were tense Cyprus was a British colony then, unrest was ongoing between the Greek Cypriot majority and the Turkish Cypriot minority.
In 1958 the T. M. T. (turk mukavement tekilati or Turkish Resistance Organization) was founded in order to face E.O.K.As (Ethniki Organosis Kyprion Argonitos or National Organization of Cypriot Fighters) the struggle of the islands partition between Turkey and Greece. Greek Cypriots shops and products were boycotted by T.M.T. at the same time Greek Cypriots had a boycott of British products presided over by E.O.K.A.

On 26th August 1922 Greek troops started their invasion but the Turkish Forces won the liberation effort against them and ended the invasion 4 days later on the 30th of August with absolute victory. On Victory Day there is a wreath laying ceremony at Ataturks mausoleum in Anitkabir which is attended by the president, force commanders, top generals and military cadets.

Turkish Republic Day is the final link with Youth and Sport Day and Victory Day to make up the chain of events that happened during the war of independence launched on 19th May 1919. In 1919 Anatolia was freed from foreign rule, Turkish troops under the command of Mustafa Kemal Ataturk were victorious on 30th August 1922 in so being paved the way later for Declaration of Independent Republic of Turkey on 29th October 1923.

Seker Bayram is a 3 day festival which starts at the end of the fasting month of Ramazan it is also known as the Sugar Festival.  It’s a religious festival with family reunions and presents and giving of sweets to visitors. Older members of family are respected during the feast of Seker Bayram by kissing their hands and most Turkish Cypriots attend mosques. There is a fun fair area with lunapark rides for the children this is situated at the northern outskirts of Nicosia; there is also crafts and traditional food. On the 27th night of Ramazan the restaurants in North Cyprus are empty, this is known as Kadir Gecesi or the night the Koran was revealed to Muhammad.

Kurban Bayram (Feast of the Sacrifice)

Kurban Bayram lasts 4 days and starts 2 months after Seker Bayram it’s a Koranic version of the Abraham- and- Isaac story and commemorates the thwarted sacrifice of Ishmael by Abraham, it was associated with the killing  and roasting of large amounts of sheep . However in Cyprus the custom has lapsed. In terms of observance Turkish Cypriots are thought to be some of the laxest Muslims in the world, most of them attend mosques, but almost everyone tries to abstain from drinking alcohol at this feast.